Write Nice Letters to People and Get Stickers

Has something got you down? Stressed you out? Scared you? That's pretty normal. It might help you to talk about it.
In Kind Words, players anonymously write out their concerns and sorrows by making short requests for letters.

Everyone can respond to requests with letters of comfort, sympathy or gentle advice.

Kind Words is a positive context; a warm, cozy mood. A place to feel centered and focused on the opportunity presented:
Use your words to lift others and be lifted in return.

You start the game with a couple random stickers in their inventory.
Stickers can be placed on letters written to others or sent as an appreciative response to a letter that has been received.
Once you get a new sticker, you can make copies of that sticker to send out to other players.
Each sticker also comes with a 3D toy that you can put on display in your room.

Swap letters to build up your collection of stickers and room decorations! 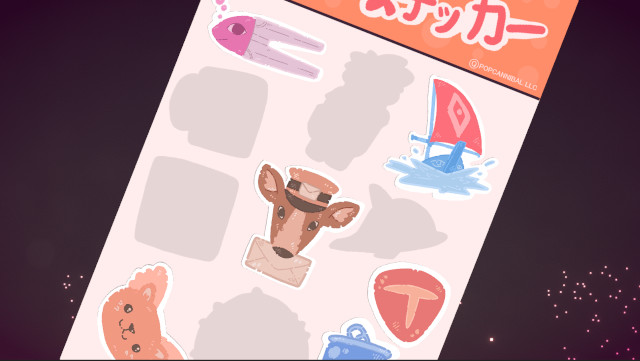 Completion: Sent a few messages and replied to many.

Stickers/Decorations give an added incentive to get involved and help others.

Music can be changed to fit your preference and mood.

Paper planes tend to get used for chain letters

Last line is lost when inserting a line break in the middle of a letter that pushes the line limit beyond the 14 line maximum.

While it may be on Steam, and it may be listed as a game, Kind Words is not something I would really class as a game. At least not in the conventional sense. That's not to say it isn't a great or inspirational experience. The whole concept behind the game is just beautiful.

It's a really simple concept, but very effective too. If you have something on your mind, issues you're struggling with, or just want to vent a little, you can spend a little time and write a letter voicing these issues. You have up to 7 lines to write what's on your mind, and this gets sent out to a whole load of others playing the game. Real people. They can then reply to your letter with advice or their own, similar experiences, or anything they think might help.

Due to the very nature of the game, it's not something I could keep playing hour after hour. I generally spent a few minutes in the game, replied to a few people with some advice or my own experiences and left it until a little bit later. I went back into the game after thinking of something other's may have been able to advise on or relate to, so wrote my first letter. I've jumped in and out several times now, just to see if there's anything I can potentially help with, and I like to think I have already. Upon receiving replies, users can send their thanks if they appreciated what you wrote them. You can also unlock new stickers and decorations for your room depending on what stamps others use on their replies.

Along with the usual letters and replies, you can send paper planes. The difference here being that these are generally used for words of kindness and inspiration, maybe even famous quotes. Once sent, paper plans will glide across the person's room for everyone to click on and read. It's generally for kind words without wanting or requiring a response. These also tend to get used as chain letters which is probably the only thing I don't like about the game.

I honestly thought I would see a lot of troll letters and replies from a game like this, but I was pleasantly surprised. So far, I've not come across any trolls or inappropriate messages. I don't know if there's a filter somewhere in the middle, but there is a report function in case something inappropraite does come through.

Another nice feature I noticed was that with a click of a button, you could turn all your letters and replies to your letters into a HTML webpage. While I'm not sure I'd use this feature, it's a nice little extra to have.

I really love the whole idea of Kind Words, and my experience so far helps rekindle my faith in humanity a little. I was able to share some advice, and even help myself a little by replying to letters I could relate to. If you enjoy giving advice or helping others, or you want a relaxing and casual way of venting or getting advice on life's problems, you could really get into Kind Words.


Coming in a future update!